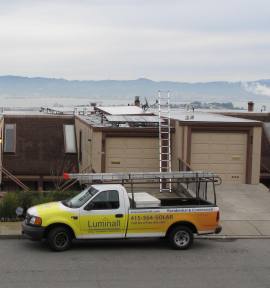 Whether you own an electric vehicle (EV) or are looking to buy one, pairing your new vehicle with a home solar electric system will save money and reduce your environmental impact.

Numerous car companies make plug-in electric vehicles, with such models as the Tesla, Mini E, Chevy Volt and Nissan Leaf. In 2012, even more plug-in and hybrid versions have come to the market, including the Ford Fusion and Toyota Prius. Rather than being controlled by rising gas prices, or even rising electricity costs, pairing a plug-in electric vehicle with a solar system allows you to drive on clean energy. After your initial payback period, that’s like driving for free!

Jason’s home in San Francisco – his solar system charges his Nissan LEAF, meaning he no longer has to fill up at the pump.