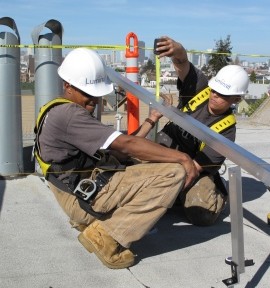 “Great experience from beginning to end working with Luminalt. The installation crew was professional, courteous, and respectful. They left the property in better condition than when they started!”

Bailey Smith, Installation Project Manager
Bailey is NABCEP Certified in both Photovoltaics and Solar Thermal, in addition to being a Journeyman Electrician. After working on an oil refinery for an environmental engineering contractor, Bailey came to Luminalt to be part of a more proactive solution to the environmental problems facing our world. Bailey supervises all of Luminalt’s installations going on throughout the Bay Area. This past summer, Bailey spent his weekends on Angel Island working with theater company We Players.

Alan Coughlan, Electrician
Luminalt’s first employee, Alan is still with us today. Since joining the team, Alan has gone on to become a certified Journeyman Electrician and holds a C-10 Electrical license. Known for his wit and humor (and red hair), Alan has an unparalleled attention to detail. We frequently hear from customers that he has vacuumed metal shavings off of their roof, or left their garage cleaner than they’ve ever seen it. Born in Ireland, Alan has led the electrical work on some of Luminalt’s more complex projects, such as the wind turbine installation at the Crissy Field Center.

Anukene Warda, Lead Installer
With Luminalt since 2009, Anukene first got hooked on solar after helping a friend install panels on his house in Hawaii. Born in San Francisco, Anukene is a NABCEP Certified PV Installer and Journeyman Electrician and has taken numerous courses at the Solar Living Institute. Anukene loves working at Luminalt because he has a “deep respect and trust in the leadership.” Despite the competitive environment in the solar industry, Luminalt takes care of its employees with health care, paid time off, and lots of donuts from local Dynamo Donuts. Anukene was recently featured on Ask This Old House installing solar in Bernal Heights, San Francisco.

Norman Ferrer, Solar Installer
One of Luminalt’s many native San Franciscans, Norm installs solar systems and can answer any questions about panels and wiring. With Luminalt since 2011, Norm loves Luminalt for all of the work we do for non-profits and the community. In addition to working on Luminalt’s fundraiser for Green Empowerment, Norm recently rode a 65-mile race to raise money for cancer research – on a fixed gear bike. Though he got his start in construction, Norm is glad that he’s now able to focus on sustainable energy and green technology.

Charlie Jaworski, Solar Installer
Back in 2010, Charlie was a student in City College of San Francisco’s first Solar Thermal Program. Noel Cotter taught that class (and developed the curriculum used by the program today), growing Charlie’s love of solar. Beyond Noel’s Solar Thermal course, Charlie has taken numerous classes in solar and construction. He is one of the newest additions to the Luminalt team.

Will Cravens, Solar Thermal Installer
With a background in green plumbing, Will is one of Luminalt’s solar hot water specialists. As one of our newest team members, Will is excited to be working in a supportive atmosphere with friendly and knowledgeable co-workers. In his spare time, he loves swimming with his two kids and going to vintage car rallies.