San Francisco Runs on the Sun 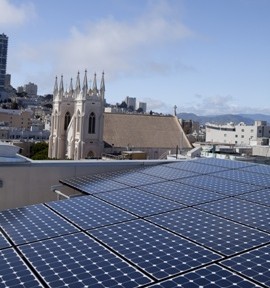 When it comes to solar power, talk is cheap. To truly understand the benefits of solar, websites and product demos can only go so far—you need to hit the streets and take in the bustle of a busy café, the whirr of the coffee grinders, the whisper-quiet hum of electric cars speeding by—and know that all of it’s powered by the sun. Recently, a tour through San Francisco did just that, giving guests a chance to really see solar in action.

Luminalt collaborated with Intersolar 2013 and NorCal Solar to showcase how solar is becoming more and more relevant in everyday living—namely a café in the Crissy Field Center and an upscale green apartment on Hayes Street in the Hayes Valley neighborhood in San Francisco.

The tour group was composed from attendees of Intersolar 2013 and hailed from many different countries—some of whom had never visited San Francisco.

With the Golden Gate Bridge arcing across from the horizon, the initial stop at Crissy Field was spectacular, allowing the group was able to witness first-hand how solar energy functions in a bustling café. August Goers, Luminalt co-owner and Vice President of Engineering, led the tour while giving insight into the nuances of solar equipment and technology.

The second tour stop joined attendees at the Hayes Street apartment building, and were fortunate to have both Goers and the green-minded building owner Linda Erkelens in attendance.

In addition to providing solar hot water systems for her tenants, Linda also provides bicycle racks and an electric car charger in the shared garage—a few simple ways to show that solar is indeed a welcome fit into meeting lifestyles and everyday living. And from the building’s roof, attendees we were able to view a number of other solar installations on neighboring roofs, as well—which was inspiring proof that solar energy is indeed the wave of the future.