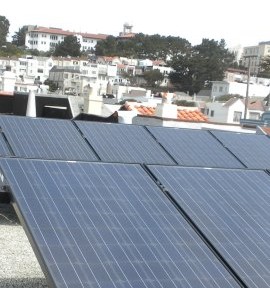 "Because we worked to conserve energy, installing solar to offset our small electrical bill just didn't make financial sense. By pairing an EV with PV, we'll save more than $60,000 in conventional vehicle costs while dramatically reducing our carbon footprint."

Clean tech attorney Jason Jungreis knows that pairing EVs with PV is a smart choice for the environment and his wallet. When Jason bought his Nissan LEAF at North Bay Nissan in Petaluma, he also purchased a solar electric system for his home from Luminalt.

Jason’s 3kW solar system was designed to produce just under 4,800 kWhs a year, enough electricity to cover the majority of his home energy use and driving. Comprised of 18 Suntech 185 watt panels and a SMA inverter, Luminalt designed Jason’s system to optimize his return on investment.

Jason drives about 1,000 miles per month, close to the national average. He finds he can drive more than 70 miles in his LEAF on a 24 kWh charge. Over the course of a few years, Jason will recoup his entire investment and begin generating free, clean power for his car and home for years to come.

Tiered electricity rates mean that your cost for electricity goes way up as you increase your use of electricity – pairing an electric vehicle with a solar electric system provides a great return on investment, making solar a decision that is both financially savvy and beneficial to the environment.

You can learn more about how pairing an electric vehicle with a solar system designed by Luminalt makes both financial and environmental sense here.

• Did you know that electrical vehicles in San Francisco charge up for free through 2013 off of hydroelectric energy from our very own Hetch Hetchy!

• The San Francisco Department of the Environment, as part of its goal to make San Francisco the “EV Capital of America” has a whole program to encourage electric vehicle use. You can read about those specific programs in this document.