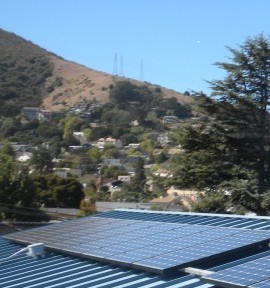 “It’s about all the stuff you can do after you have switched to organic produce and florescent light bulbs.”

Greg and Barbara installed solar with Luminalt last year as part of their family’s commitment to reducing their carbon footprint. As chronicled on their blog, Green Knowe, solar was only one aspect of their broader commitment to using fewer natural resources. They are a fantastic example of a family that is combining their solar installation with a greater awareness of their electrical usage. Working together, they have reduced their usage significantly by being aware of how they use electricity and when. Their usage is now 70% below the national average.

For a family that’s interested in going solar, they recommend you “take another look at anything that is left on 24/7.  Even appliances with a very small power drain can add up to a significant portion of your total electrical usage, so turn off anything that can be turned off!” Reducing this so-called “phantom load” can add up over the course of a year.

Like many households going solar, Greg and Barbara chose to pair their solar system with an electric car. Beyond the financial savings, this combination greatly reduces their dependence on coal and oil. On the family’s blog , Greg has carefully calculated the offset of this choice in his detailed posts on the family’s Nissan LEAF. Greg blogs about how he has combined a Nissan LEAF with solar – his blog is a great resource for those interested in pairing an electric vehicle with a solar system. The Golden Gate Electric Vehicle Association is another good resource for those interested in making the transition. You can read about another Luminalt customer, Jason, who paired solar with his electric car.

In addition to using their blog as a forum for outreach and education, Greg and Barbara started the Brisbane Re-Use Coop, an online way for their local community to trade, barter and sell. Though they compare it to Freecycle or Craigslist, the goal of the Brisbane Re-Use Coop is for “things to not have to travel as far to find a new home,” while also building a sense of community.